In Part 2 of Retro-acoustical guidebook gold, we bring you Chapter 1, in which authors address rampant construction of noisy buildings…even in the face of growing public demand for noise control.

Several weeks ago, I introduced the Retro-acoustical guidebook gold project as part of BAP Acoustics’ ongoing commitment to raising awareness around the critical role of acoustical design in architecture.

Published in 1967 by a now-defunct US federal government department, this little-known industrial handbook—A Guide to Airborne, Impact, and Structure Borne Noise Control in Multi-family Dwellings (hereinafter referred to as The Noise Control Guide)—remains a trustworthy reference for the layperson. To the best of my knowledge, it’s only available as an archived, somewhat legible PDF; hence my revival work, accompanied here and there by personal observations and highlighted text to indicate noteworthy content.

“It’s an excellent overview,” Robert Healey, Acoustical Consultant at ProSoundWeb maintains. “It’s 50 years old and has been ignored by architects for the same period of time,” he adds wistfully.

Even within the guide itself, some of the writing is characterized by an unmistakable tone of frustration and even admonishment. But in keeping with the consummate diplomacy required for Libra membership, I promise not to cop that tone for use with my own voice…although I’m not above a little, uh, beseeching.

I’m only making all this noise about noise because, if anything, the negative impacts of noisy buildings on occupants have grown exponentially since the 1960s. But in spite of that, too many construction industry stakeholders seem under-informed about the problem and—more importantly—the mitigatory measures that can be taken to prevent it:

To minimize the annoying disturbance caused by [noise sources], architects must have a general knowledge of the principles of noise transmission and be able to apply proper design techniques in order to provide effective controls.

With these objectives in mind, this Guide incorporates a broad range of criteria appropriate for isolating airborne, impact, and structure-borne noise associated with residential construction.

—from The Noise Control Guide

Much has changed since 1967, but the laws of physics remain unamended. And—quieter modern appliances notwithstanding—the public demand for noise control may be growing faster than our communities. So let’s measure twice, put the fun in fundamentals, and give the people what they want before they get really loud! May The Guide be with you. 🙏

Before reading on, please be aware that while The Noise Control Guide remains very useful in a practical sense, the writing within can be a bit cringe-inducing, and not only in terms of grammar and structure.

But issues such as the use of “he” as THE sole singular pronoun are merely cultural reflections of the 1960s.  I’ve gritted my teeth and committed to recreating The Noise Control Guide because I literally can’t find anything else like it—i.e. a reasonably easy to follow handbook for the layperson—published in recent years.

The Guide was written by professional men (I’m guessing engineers) for men employed in adjacent industries. Notably, for a utilitarian guidebook, it gets pointedly critical. Number 3 below—Poor Workmanship—was motivation enough for writing this little caveat!

The accelerated growth and increasing severity of the noise problem in multifamily dwellings have caused considerable concern not only among apartment occupants and owners but also among investors, real estate interests and governmental agencies.

The current building trend toward lightweight structures, the increasing concentration of dwellings in urban areas, and the increasing noisiness of our environment have led to a growing number of complaints to the Federal Housing Administration (FHA) of inadequate sound insulation in multifamily dwellings.

People have become aware of the noise problem and are more sophisticated in their appreciation of the benefits which careful attention to noise control can provide; therefore, they expect and demand more privacy in their homes and greater freedom from the intrusion of noise from neighbouring dwellings.

Although the building industry takes pride in its remarkable achievements, conventional building techniques have produced some of the noisiest buildings in existence.

Major property management firms report that noise transmission is one of the most serious problems facing managers of apartment buildings throughout the country, Managers and owners of apartments readily admit that market resistance is not only increasing as a result of excessive noise transmission, but that lack of both acoustical privacy and noise control are the greatest drawbacks to apartment living.

The basic causes of the noise problem and the major reasons for complaints are due primarily to the following factors:

1. Lightweight Building Structures: For reasons of economy and space-saving, builders are using thinner, lightweight partition walls and floor-ceiling assemblies which provide substantially less sound insulation than their more massive counterparts of the past.

2. Poor Acoustical Design: The selection of a building site, the orientation of the building structure, and the design and/or layout of interior rooms or spaces without regard to noise sources or to the separation of noisy areas from those requiring privacy usually result in or intensify noise problems. Although ignorance of noise control principles is the chief cause of the above oversights, the use of good judgment in building design would avert such problems in many cases.

3. Poor Workmanship: Much too frequently the planned sound insulating performance of high]y rated wall and floor assemblies is nullified by careless work by the tradesmen or building constructors. Serious sound leaks can result from:

Such leaks are frequently concealed behind thin cover plates, molding, or trim work all of which are, unfortunately, ineffective noise barriers.

4. Mechanization: The increasing use of labour-saving devices and mechanical appliances such as dishwashers, garbage disposals, vacuum cleaners, air conditioners, televisions, and stereo sets has raised the background noise level. Further, the progress in mechanization continues to outrun advances in the technology of machinery noise control.

5. High-Rise Apartments: The current trend toward construction of high-density apartment buildings has resulted in a greater concentration of people in a much smaller area. Increasing family concentration results in greater interfamily friction, unless appropriate countermeasures are taken. High population density was an important factor in the early adoption of noise control requirements in European building codes.

7. Increasing Desire for Privacy: The glamour and convenience of high-rise, townhouse apartments are attracting families from suburban areas in growing numbers. Many of these families, who have enjoyed the peace and quiet of living in private homes, now find the noisy environment of apartment living intolerable; they expect and demand a degree of peace and privacy comparable to their former environment.

8. Inadequate Education, Training and Research: Inadequate education and research are the underlying causes of the noise problem described above. Although the problem is nationwide and as important to the economy as to the well-being of the citizens, the government has failed to conduct or support adequate educational or research programs in acoustics and noise control.

The few acoustical laboratories supported by the government are relatively small and of limited use. In some cases, they are obsolete by present standards, particularly in the field of architectural acoustics. Although some work in noise control is being conducted by the government, industries and technical universities, the total effort expended and the number of skilled scientists and technicians engaged in this work are too small.

The failure of our technical colleges and universities to provide comprehensive training in acoustics and noise control has resulted in a severe shortage of acoustical engineers. Unless such training is made widely available and required of people engaged in the manufacture of mechanical equipment and appliances, as well as those associated with the building industry, city planning and transportation systems, progress in overcoming the national noise problem will be very slow indeed.

The most prevalent noise complaints among apartment dwellers involve the transmission of noise originating inside the building. Typical noise sources are television, radio or stereo sets, occupant activity, plumbing fixtures, electro-mechanical equipment and household appliances, as illustrated in Figure 1.1. 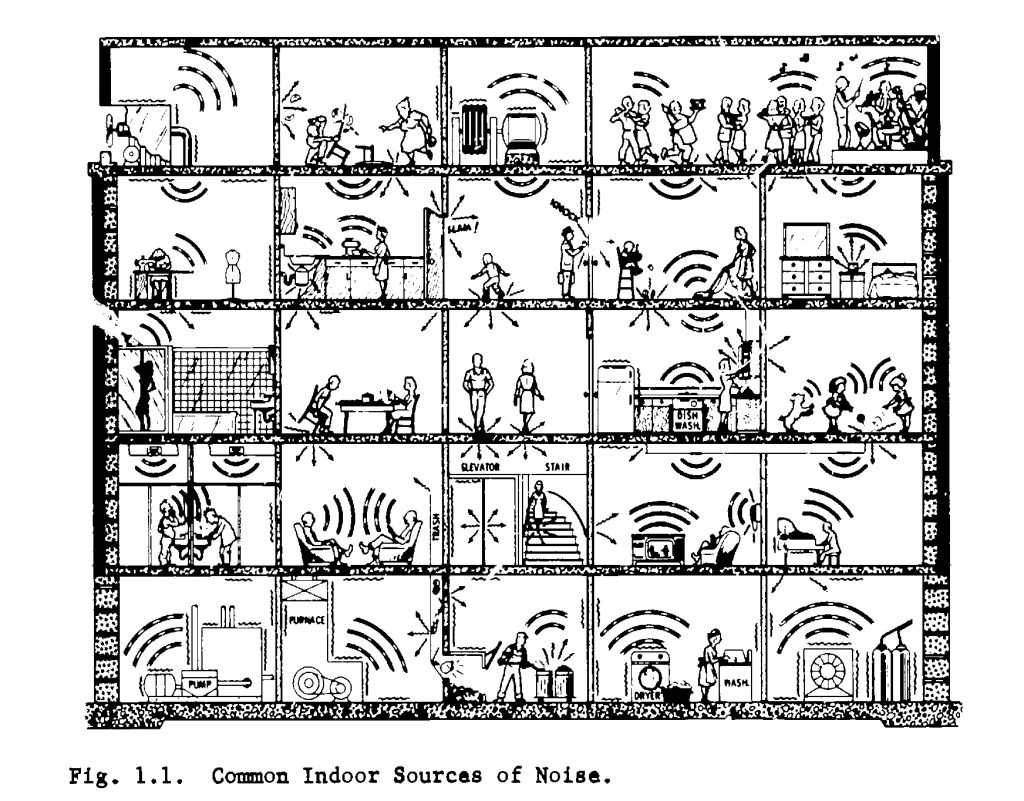 Surprisingly, the frequency of complaints appears to be independent of income bracket in virtually all types of apartment buildings, including high-rise as well as low-story garden-type apartments. Luxury, middle and low-income apartments register approximately the same number of complaints because most of the buildings utilize the same type of wall and floor assemblies. This fact clearly demonstrates that builders and architects do not consider privacy and quiet surroundings as necessities, much less luxuries.

The causes of most noise problems in multifamily dwellings originate in the early design stages of the buildings because of the architect’s lack of concern about noise problems and his failure to foresee where and under what circumstances noise might be a problem.

Most people will agree that what pleases one’s senses enhances one’s comfort. Oddly enough, a peaceful and relaxing environment apparently is not recognized as essential to comfort, judging from the fact that it is lacking in a high percentage of buildings. Obviously, we are approaching the time when architects must pay adequate attention to acoustical problems.

B. Cost of sound insulation

The owner of an apartment development is in a highly competitive market; cost largely determines the amount of sound insulation or noise control that he can install. Unfortunately, there is relatively little reliable information on which to base an estimate of the additional cost involved in constructing buildings with adequate sound insulation. However, some estimates indicate that the additional expenses for the acoustical design and treatment of new buildings might range from 2% to 10% of the total cost of the building, depending on geographic area, labour market and other economic factors.

While many architects and builders might consider such costs much too high, they should recall that their predecessors voiced the same criticism relative to central heating and air conditioning. Despite their high costs, central heating and air conditioning are considered to be necessities not only in office buildings but in homes and indeed automobiles as well. Judging from the increasing public demand for immediate legislation for the adoption and enforcement of anti-noise ordinances and sound insulation criteria, particularly in multifamily dwellings, sound-insulated buildings are now regarded as a necessity for which the public is willing to pay a premium.

One point which can not be overemphasized is that a substantial degree of sound insulation can be purchased at relatively little cost through good planning and design, as discussed in Chapter 5. Proper selection of building site, building orientation and equipment, and careful design of space layout contribute substantially toward achieving good sound insulation at little cost.

Although sound-insulating construction will add to building costs, the expenses of correcting acoustical mistakes usually are several-fold higher. In some instances, there may be no solution short of a major, extensive and prohibitively costly overhaul of the building interior; for example, redesign and installation of heating and air-conditioning systems and/or partition wall and floor assemblies.

Perhaps the highest price that an architect, builder, investor or owner might pay for an acoustically inferior building is expressed in terms of loss of reputation, public confidence, and profit for all parties concerned.

Through the development and preparation of this Guide, FHA has taken the initiative in providing architects, designers, contractors, builders and public housing officials with needed assistance in meeting the growing public demand for control of the entire building noise problem, particularly with respect to multifamily dwellings.

The problem is primarily one of noise transmission from one apartment unit to another within the same building, although the problem of intruding noise from outdoor sources such as aircraft and traffic can by no means be dismissed as trivial. If a certain measure of success is to be achieved in reducing noise transmission in buildings, the problem must be approached methodically. A general knowledge of the principles of noise transmission and methods of control should enable one to deal with most noise problems which come his way.

We hope you’ve found this introductory segment informative, perhaps noting how some of the noise control-related problems inherent in 1960s multifamily construction are still with us today. North American post-secondary institutions, for instance, remain without the acoustical engineering programs needed for training new professionals in this increasingly essential field.